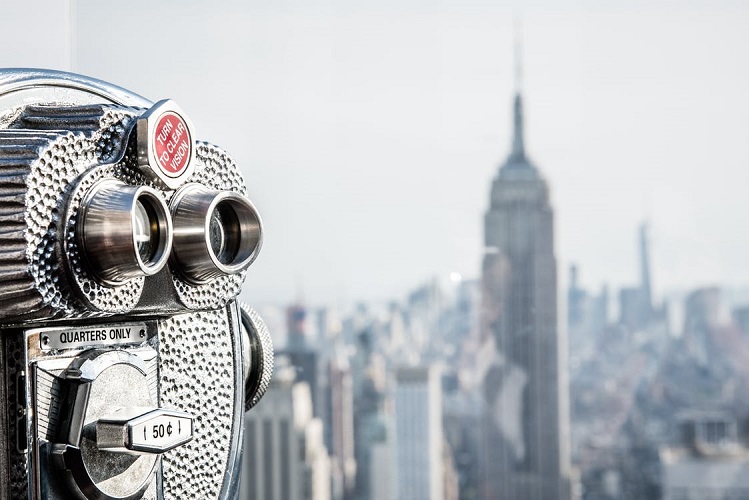 Do you enjoy looking down on everything and everyone? (No, really, in this case, it’s OK.) After all, some of the best scenic and cityscape views can be found in the US. Here then, are 10 incredible observation decks in the USA.

Observation Decks in the USA 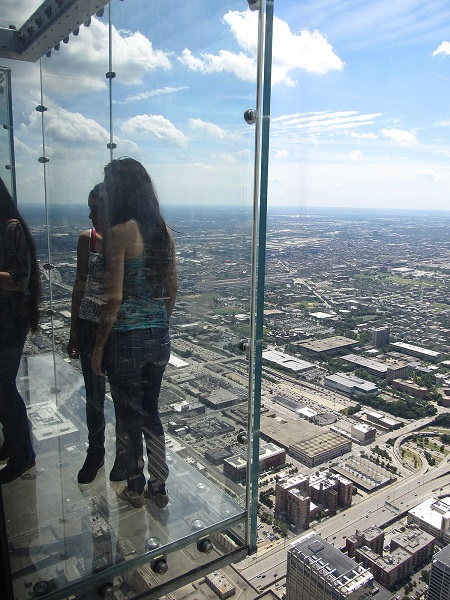 Chicago’s Skydeck is the highest in the US. Located on the building’s 103rd floor, you will take in incredible views of not only the city but also the neighboring states of Michigan, Indiana, and Wisconsin. The 110-story tower on South Wacker Drive is one of the city’s biggest tourist attractions and was completed in 1973.

It was then the world’s tallest building. The observation deck opened in 1974. You take a one-minute elevator ride to reach the top. The newest additions to this attraction are great glass-bottomed skyboxes. 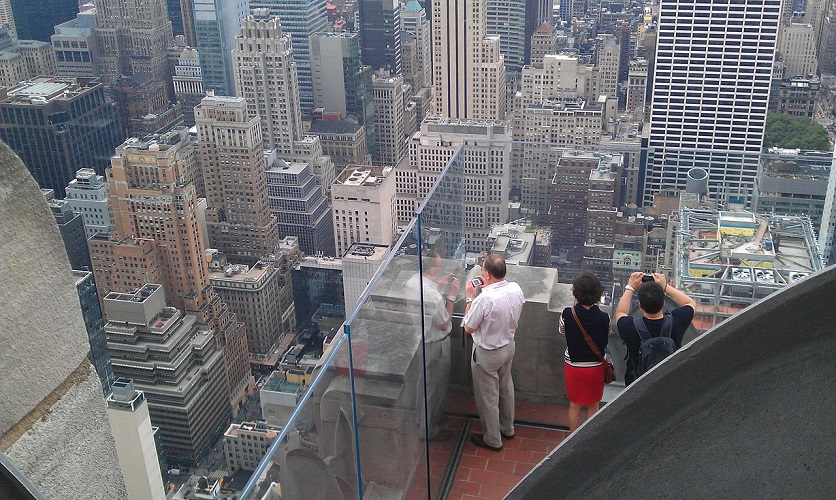 This observation deck at 30 Rockefeller Plaza in New York City provides visitors with a beautiful bird’s eye view of the iconic “Big Apple.” It is centrally situated at the top of the well-known Comcast Building in famous Rockefeller Center Plaza. It’s the tallest building in the popular plaza and the city’s 28th tallest. The 66-story building’s outside observation deck actually extends three additional levels. While not the highest of decks, a lot of visitors prefer this because it reportedly “has the best overall view.”

3.  SkyPod at The Strat, Nevada 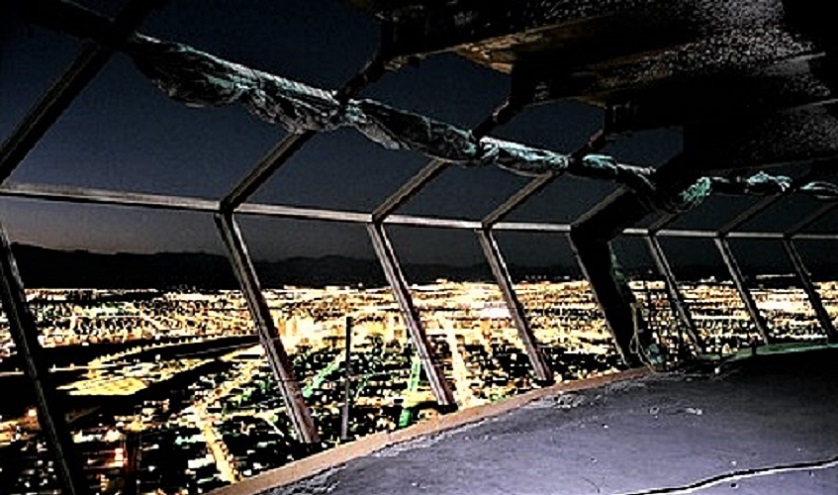 The Strat on South Las Vegas Boulevard in Las Vegas is a large multi-building complex. It features a casino and a hotel in one building and a separate observation tower. The Stratosphere Tower is the officially tallest freestanding observation tower in the US. It is almost 1.150 feet high.

Thus, the observation deck is one of the highest in the country. Technically, there are two observation decks because there is an indoor and outdoor section. Visitors get a great view of the strip and the entire Las Vegas Valley.

4.  One World Observatory at One World Trade Center, New York 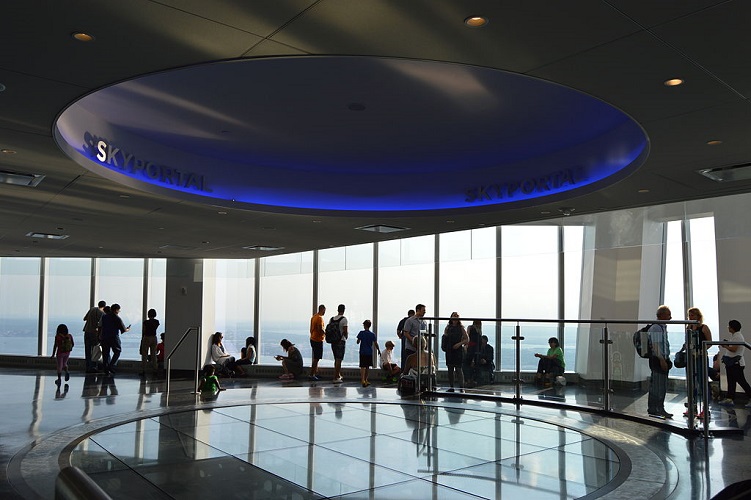 Here you’ll discover more than amazing views. You will also learn how the events of September 11th forever changed the famous New York City skyline. The One World Trade Center was built in remembrance of the fallen Twin Towers.

Erected in 2015, it is the nation’s tallest building due to the spire atop it. It is situated on West Street in Downtown Manhattan roughly at Ground Zero, where the Twin Towers once stood. The observation deck is on the 102nd floor and includes multiple levels. 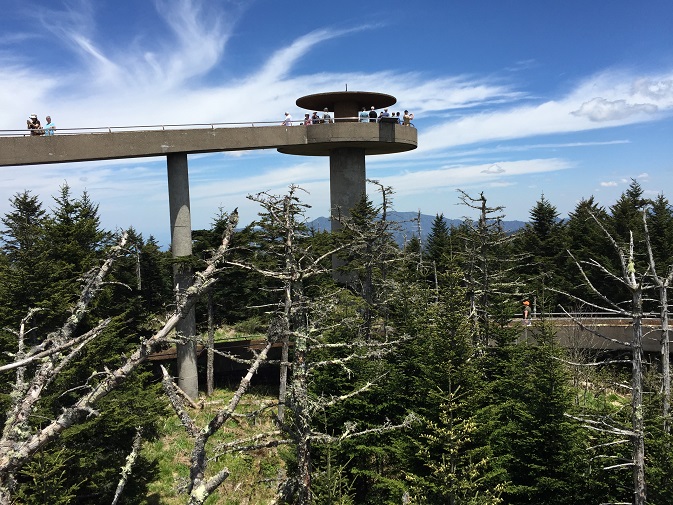 It stands 45 feet high. Hike the popular Clingmans Dome Trail to get there. Then take the elevated ramp to the top. Its circular deck includes information panels regarding various points of interest you can see from there.

6.  The Loupe at the Space Needle, Washington

The famous Space Needle on Broad Street in Seattle is iconic. Specifically built for the World’s Fair in 1962, it still stands as a symbol of Seattle, and a favorite tourist attraction because of the recently renovated observation deck now named the Loupe. It is 520 feet high and one can see not only Seattle, the Cascade Mountains, Mount Rainier, and even distant Puget Sound. You can take the convenient high-speed elevator to get to the top in under one minute. It features a first-of-its-kind rotating floor and an open-air deck. 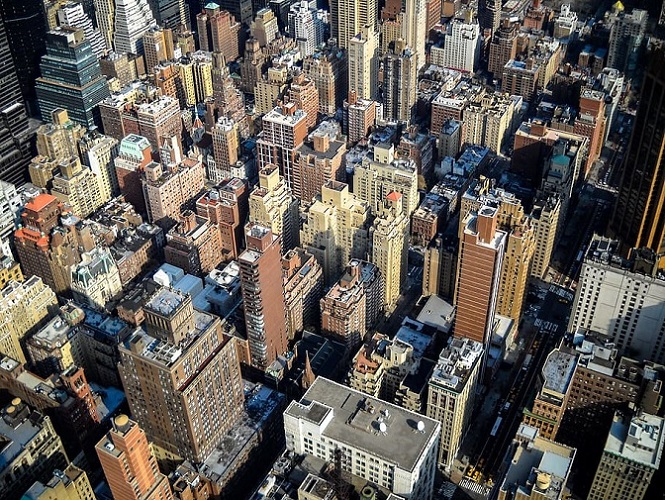 Regular readers of our online articles are already familiar with the popular Empire State Building on West 34th Street. Indeed, it is world-famous and one of New York City’s tallest too. Built in 1931, this pop culture icon includes a glass elevator and multiple observation decks. Indoor observatories are located on the 80th and 86th floors. From the main observation deck on the 102nd floor 1,224 feet above the ground, you will get a 360-degree view of famous Manhattan and, on a clear day, six states from the well-known outdoor deck. 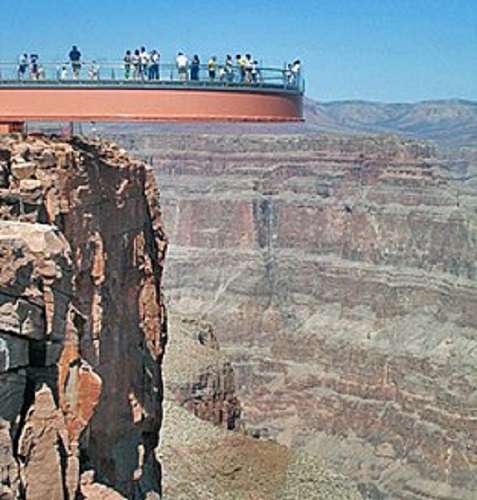 Regular readers also might know your rovin’ writer hiked the Grand Canyon rim to rim here in popular Grand Canyon National Park. However, if you’re not up for that adventure, this observation deck reportedly “adds a bit of thrill” to the overall experience. Many tourists simply stand on the Canyon rim’s edge to see it, but this glass-floored pedestrian walkway, opened in 2007, is shaped like a horseshoe and extends out over the canyon’s edge. Thus, it allows visitors to actually look both across and down into the canyon. 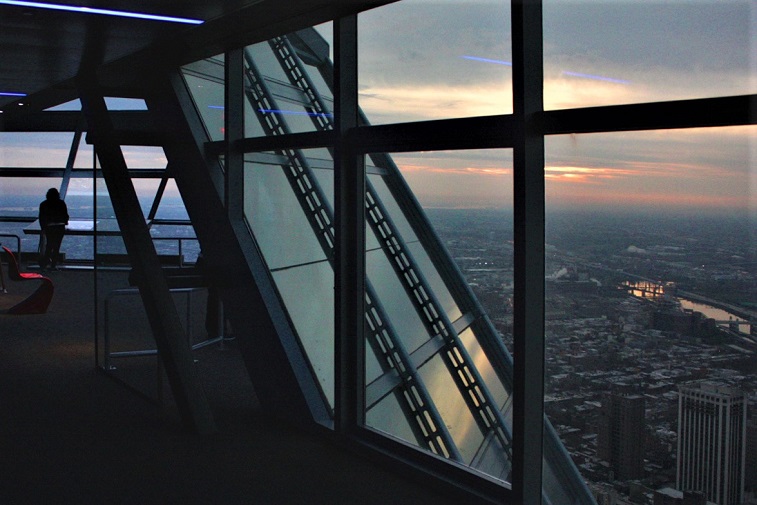 This observation deck is located inside One Liberty Place on Market Street in Center City, Philadelphia. Also referred to as Philly From The Top, it offers observers 360-degree views of the old, historical city. The building itself is the tallest one in the city. You’ll find the observation deck on the 57th floor. At an elevation of 883 feet, this indoor observation experience allows visitors to 40 miles in any direction. There are also statues, games, and interactive displays. Even the elevator ride to the top includes an educational audio-visual experience. 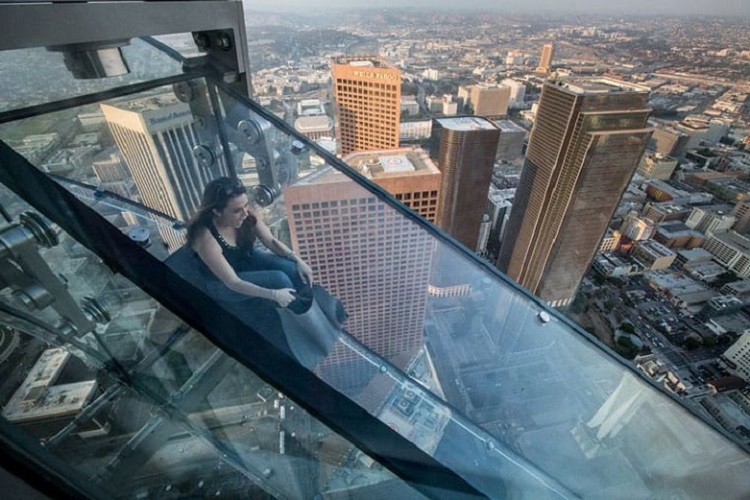 You can take in a 360-degree view of L.A. from California’s highest open-air observation deck. It’s located on the 70th floor of the US Bank Tower nearly 1,000 feet above the city. Opened in 2016, the deck includes both indoor and outdoor areas. The highlight of this must-see place is the Skyslide which is nearly four feet in width and 45 feet in length. Built out of 1.25-inch glass, you can slide from the 70th floor to the 69th floor outside of the tower.

9 Things to do in and near the Grand Canyon

Unusual Places To Stay Around The World